It’s time for the season-ending championships again, a time of year top tennis stars and hardcore fans alike greet with a mixture of nervous excitement and exhausted relief. Eight of the WTA’s top nine players gather in Istanbul for an indoor showdown that will have spectators breathtaken by quick points and bewildered by the complexity of round-robin standings. Current number-three Maria Sharapova is still out of action recovering from shoulder bursitis. Number-ten Caroline Wozniacki and number-eleven Sloane Stephens will be waiting in the wings as alternates in case one of the direct entries is unable to play all her round-robin matches.

Most of the players in Istanbul have played each other many times before, in a variety of circumstances. Indeed, seven of this year’s players were also in the WTA Championships field last year. Therefore, the players’ head-to-head records give us a pretty good idea how they’re likely to match up. With the arguable exceptions of Serena Williams and Jelena Jankovic, this year’s players are much more capable than they were four years ago, so I also broke out their records over the last three years, as well as on hard courts: 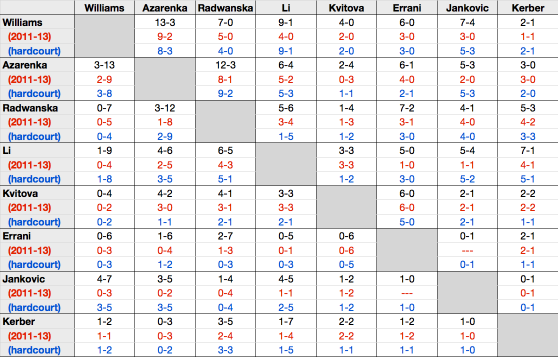 (You can also download the head-to-head grids in pdf format.)

Head-to-head numbers hardly tell the whole story, though. It’s been a long season, and players’ motivation, energy, and form will vary. Only Angelique Kerber has played in the last three weeks. Some players will adjust to the indoor conditions better than others. There aren’t many indoor events on the WTA schedule these days, especially ones that fit well into top stars’ schedules. Although many played indoor clay events in the spring, six players will be playing their first matches of the year on indoor hard courts. Petra Kvitova has built a reputation as a queen of indoor hard courts, but hasn’t played on one since Fed Cup in February. Kerber won the Linz title indoors two weeks ago, looks more confident, aggressive, and happy on court lately, and could have an early advantage.

Going down the ranking list one pair of players at a time, players were randomly drawn into either of two round-robin groups. Today through Friday, each player will play against every other player in her group. The best two players in each group advance to Saturday’s semifinals, where the first-place finisher from each group plays the runner-up from the opposite group. If two players finish round-robin play with the same match record, the match they played against each other breaks the tie. Three-way ties are decided by sets won and lost, and if necessary, games. 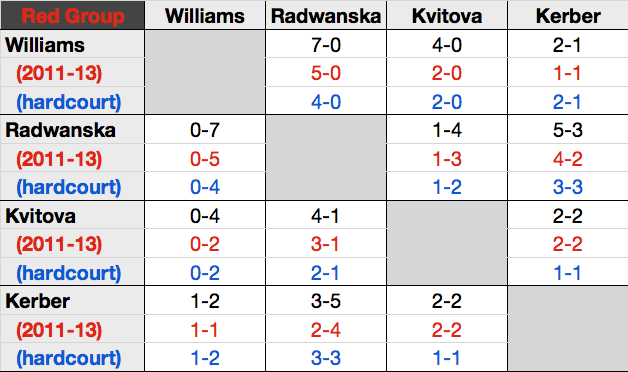 Most of the tournament’s firepower has ended up in the Red Group. With an amazing 73-4 match record this year and astonishingly having lost only one match in her career to the other players in the group (combined!), Serena Williams is the clear favorite. Nothing will be easy though, in this field. Serena’s first match comes today against Kerber, who has already adjusted to playing indoors, and who beat her in straight sets last year in Cincinnati. Agnieszka Radwanska is much more of a threat to Williams than the one-way head-to-head seems to indicate, having taken Serena to three sets in last year’s Wimbledon final and played her close this year in Toronto. If Williams’ accuracy or speed are off, Aga has the versatile and unshakable game to take advantage of it. There’s no question that on her best form, Petra Kvitova has the power and natural aggressiveness to match Serena, and there’s no place she’s more likely to find that form than on an indoor hard court.

After Williams, Kvitova is the most likely to advance, but only by a narrow margin. The indoor conditions suit her game. Winning Tokyo and reaching the Beijing semifinals, Petra had the best fall season in the WTA—but she didn’t do it without showing she’s still a very inconsistent player. Starting with the Tokyo semifinals, Petra has played six straight three-set matches, losing a 6-0 set to Kerber and two 6-1 sets to Jankovic. Kvitova matches up well against Radwanska—Aga’s only victory against her came in Istanbul last year just before Petra withdrew with a viral illness—but once again Aga will take advantage of any lapse in Petra’s form. Kerber has very close records against both Kvitova and Radwanska, and the scorelines of very nearly every match are close as well. If Angie catches just one opponent insufficiently prepared for the pressure of the event or the indoor conditions, it might well give her the edge she needs to reach the semifinals. 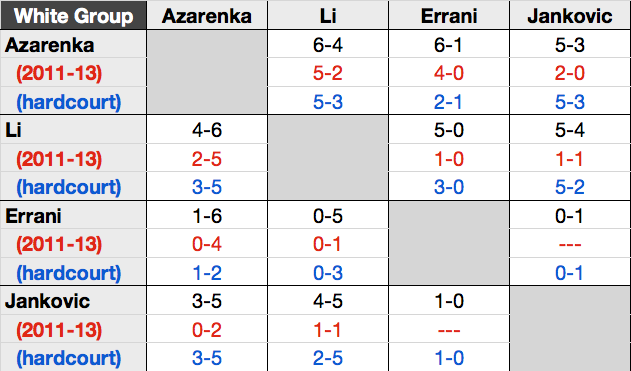 The White Group seems much easier to predict, although again every player earned her way into this field against tough competition, and no one should be written off. Despite having failed to win a match since the US Open (with tough opening-round draws in Tokyo and Beijing against underranked Venus Williams and Andrea Petkovic), if Victoria Azarenka is motivated she’ll be the favorite. Azarenka’s close head-to-head records against Li Na and Jankovic are deceptive—Vika has won her last five matches against Na and her last four against JJ. Many have pointed out that Sara Errani’s one victory against Azarenka came in the only match they’ve ever played on an indoor hard court, but that was in 2008, when both were very different players. Li can’t match Azarenka’s consistency and versatility, and Errani and Jankovic can’t match her power.

Li is likely to emerge from this group as the runner-up. Always a powerful shotmaker dangerous to any opponent, she’s become much more technically and mentally consistent over the past year or so. Her head-to-head record versus Jankovic looks complicated, but one match stands out—in their only hardcourt match since 2009, Li prevailed, 6-3 6-0 this year at the US Open. Li’s head-to-head against Errani is much simpler—in eleven sets they’ve played, Na has lost more than two games only twice.

To me, the most intriguing match in this group will be between the two underdogs, Jankovic and Errani. Amazingly, these two seasoned and determined competitors who largely prefer the same surfaces have only played each other once before, Jankovic winning a close three-setter in Indian Wells in 2010. A two-time WTA Championships semifinalist, JJ returns to the event for the first time since going 0-3 in round-robin play in 2010. Jankovic should be well motivated, and with her flatter hitting likely to suit the conditions better, she would seem the more likely victor. But Errani has become a much more confident and aggressive player over the last two years, and surprised a lot of people in Istanbul last year by playing Radwanska to a close three-setter and beating first alternate Stosur, 6-0 in the third set. Sarita will be determined to show her competitive potential again, and is probably the more mentally resilient of the two.

If the round robin groups play out as I’ve predicted, the semifinals will feature Serena Williams vs. Li Na and Victoria Azarenka vs. Petra Kvitova.

Many fans have been eagerly anticipating another Vika-Petra match since Kvitova won her fourth straight match against Azarenka to win the WTA Championships two years ago, capping the season of her career. That was before Vika tasted a slam victory or reached the number-one ranking, however. Since then, Vika has become a more consistent, confident, and determined competitor, and Petra has slid toward the consistent inconsistency that has defined most of her career. Another match between them in Istanbul would be intriguing and likely very competitive.

A Serena-Na match is likely to be fun to watch, especially for fans of power and quick points. Their matches almost always feature close sets. But there wouldn’t be too much doubt about the outcome: Li hasn’t actually won a set from Williams since 2009.

This site uses Akismet to reduce spam. Learn how your comment data is processed.